Look it up, there are a few videos online about the WCMD, but dropped from B-52s.  Talk about taking out an Iranian speedboat or three and leaving nothing behind…

IRGC hijacks a third foreign tanker, curiously one belonging to their supposed ally Iraq – like Muscovy, Tehran is fond of treating its supposed friends with duplicity.

USAF F-15Es now flying SuCAP (Surface CAP) over the Gulf armed with WCMDs what would make short work of any of the smaller IRGC surface assets.

US continues its effort to form a coalition force, with AUS also invited, other than European nations.

The F-15E Strike Eagles from the 336th Expeditionary Fighter Squadron are flying air operations in support of maritime surface warfare. Their role is to conduct combat air patrol missions over the Arabian Gulf and provide aerial escorts of naval vessels as they traverse the Strait of Hormuz. The F-15E is a dual-role fighter designed to perform air-to-air and air-to-ground missions and is currently conducting Surface Combat Air Patrol (SuCAP) operations to ensure free and open maritime commerce in the region. The 336th EFS is assigned to Al Dhafra Air Base, United Arab Emirates, and arrived in country the second week of June, joining ADAB’s inventory of other fighters to include F-15C Eagles and F-35A Lightning IIs. The F-15E has the capability of carrying a robust assortment of air-to-ground munitions, and flies with various configurations to ensure an ability to respond effectively to dynamic situations. 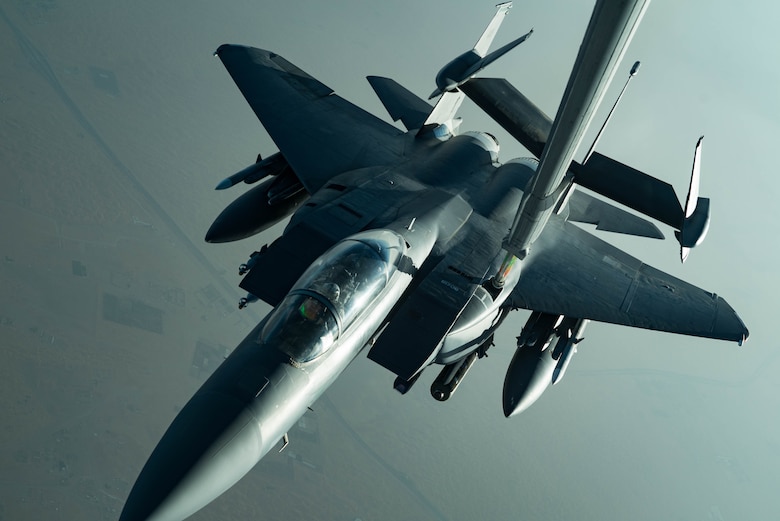 US Air Force F-15 fighter jets are patrolling the Persian Gulf with cluster bombs, and they may be Iranian gunboat killers | Business Insider

F-15s Over the Middle East: How 1 of the Air Force’s Top Fighters Is Watching Iran

F-15s Over the Middle East: How 1 of the Air Force’s Top Fighters Is Watching Iran | The National Interest

Iran says will not tolerate ‘maritime offences’ in Gulf – Reuters

Iran runs security in the Strait of Hormuz and will no longer tolerate “maritime offences” there, its foreign minister said on Monday, a day after it seized a second oil tanker near the strategic waterway that it accused of smuggling fuel.

The Iranian forces intercepted the ship Wednesday near Farsi Island, which is used by the Revolutionary Guards as a navy base, state media reported on Sunday.

The unidentified vessel was reportedly taken last Wednesday near Farsi island, where Iran maintains a naval base. Iraq’s oil ministry has denied it has any connection with the ship.

(Bloomberg) — Iran is responsible for security in the Persian Gulf and is acting more vigorously to protect it, Foreign Minister Javad Zarif said, suggesting that a showdown between his country and Western powers over crucial shipping lanes could escalate.“We used to overlook some violations but no

IRANIAN state media says Tehran has seized another foreign oil tanker in the Persian Gulf and detained seven sailors as tensions in the contested Strait of Hormuz grows.

State news media reported that the Islamic Revolutionary Guards Corps had seized a ship smuggling fuel to Arab countries and had detained the foreign crew.

Iran accuses the tanker of smuggling fuel to Arab states.

Al Jazeera English Published on Aug 4, 2019 Iranian naval forces have seized a foreign oil tanker in the Gulf that was accused of smuggling fuel to Arab countries, according to state media. A commander of Iran’s Revolutionary Guards Corps (IRGC) was quoted as saying on Sunday that the seized vessel was carrying 700,000 litres of fuel. Seven crew members, all foreigners, were arrested and taken to the southern port city of Bushehr. Al Jazeera’s Dorsa Jabbari reports from Tehran.

Iranian state TV reports seven sailors on board the tanker, which it says was smuggling fuel to Arab states, have been detained. Seizure comes one month after Iran seized a British tanker in Strait of Hormuz.

Tensions have been brewing in the Gulf region since Iran seized a UK-flagged oil tanker last month citing violations of maritime rules. Weeks earlier, an Iranian oil vessel had been detained off the coast of Gibraltar for allegedly breaching anti-Syrian sanctions.

TEHRAN: An Iranian general said on Sunday the chances of a conflict breaking out in the Gulf region have decreased, after a spate of hostile acts in the key waterway.”At first glance, it may seem that the situation in the Persian Gulf is heading towards a military conflict but when studying the situation more deeply, we see that chances for such a conflict become less

“It carried 700,000 liters of fuel. Seven sailors onboard of the tanker, who are from different nationalities, were detained,” TV quoted IRGC commander Ramezan Zirahi as saying.

According to IRGC, the foreign vessel was seized in the vicinity of the Persian Gulf island of Farsi on 31 July, which makes it the third tanker seizure by the Iranian Revolutionary Guards over past July.

“The third step in reducing commitments to [the nuclear deal] will be implemented in the current situation,” Zarif told ICANA, an official Iranian news agency. He did not specify the nation’s next nuclear moves.

Robin Wright reports that the Iranian Foreign Minister, Mohammad Javad Zarif, was invited to meet with President Trump just weeks before the Administration placed sanctions on Zarif for functioning “as a propaganda minister, not a foreign minister.”

Iran’s Foreign Minister Mohammad Javad Zarif says that he was sanctioned by the United States after refusing an invitation to meet President Donald Trump at the White House in July.

Iran continues oil supply to the Mediterranian and Asia defying the USA sanctions. This was reported by the New York times based on its own investigation. It is noted that the daily newspaper detected the movement of 70 Iranian tankers due to help of the MarineTraffic, Refinitiv and Planet Labs services. According to the investigation, when the sanctions came into effect after May 2 2019, 14 tankers still continued exporting the oil to China and may also have gone to Syria and Turkey through the Suez Canal. Iran was transporting more than 500,000 barrels since June. It stands to mention that despite of the fact that Iran keeps oil supplying Tehran reduced export volume. The USA government declared the start of a new packet of sanctions against a number of natural and legal persons in Iran due to a nuclear programme development in spring 2019. Iran and international mediators came to an agreement relative to the country’s nuclear programme in 2015. Iran agreed to refuse from it in exchange for termonation of the long-term sanctions regime.

The United States has been trying to lobby several countries around the world to join its proposed international maritime coalition to police the Persian Gulf region as tensions with Iran continue to boil.

Mike Pompeo gave the strongest level of rhetorical support for the Australia-US relationship, given by a US Secretary of State, in a very long time.

Australia is expected to announce the commitment soon as US-Iran tensions remain high.

Australia is carefully weighing up a request from the United States to help confront Iran by providing security to trading ships passing through the Strait of Hormuz.

Can the Middle East escape its ‘1914 moment’? – The Washington Post

A single Iranian or U.S. attack by rocket, drone or limpet mine could set off a spark akin to the assassination that convulsed Europe in war in 1914, a new report warns.

Tehran has read the American playbook and through its recent actions is attempting to assert power in the Persian Gulf, power beyond just the areas controlled by its coastal waters.

So Much for Suez: What Britain’s Tanker Crisis with Iran in the Gulf Really Means | The National Interest

In the Persian Gulf, Britain has been caught in a trap of its own making.

State news agency reports crash was due to technical problem, says both crew members survived; no word on purpose of flight

Why are young people in living in their cars in the Iranian capital?

No nation has yet claimed the July air raids against two bases of a Shiite militia backed by Iran.