The LobeLog, yesterday, published a piece titled “Is The State Department Funding Attacks On Activists?”

An offending tweet was offered as evidence of “attacks” on “human rights organizations, Iranian-American activists, journalists, and others advocating against the escalation of tensions between the United States and Iran.” 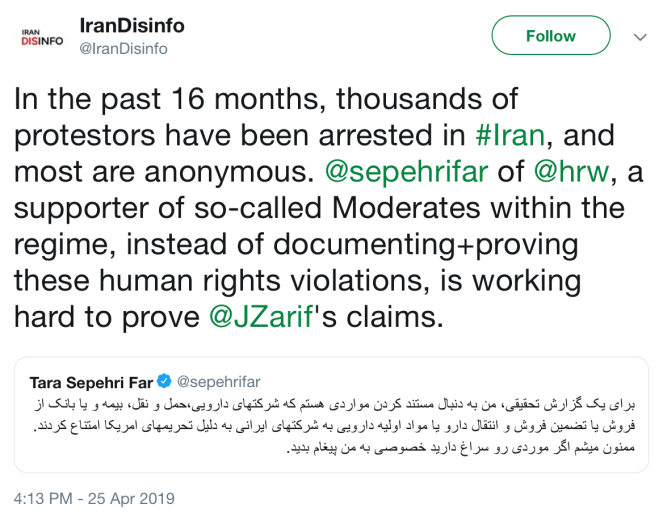 After examining the tweet, I do not see evidence of any attack.  Exposing arrests in Iran, exposing those enabling moderates within the [Iranian] regime, and citing that someone is working to prove someone else’s claims looks like what a good exposé of a bad person, organization, or action should be.

Surely, if the @IranDisinfo account is attacking, or as shown below, has slandered, the evidence should be easily shared.

Secondly, the tweet was sent out by @IranDisinfo which openly claims to be sponsored by the US State Department’s Global Engagement Center.

To direct, lead, synchronize, integrate, and coordinate efforts of the Federal Government to recognize, understand, expose, and counter foreign state and foreign non-state propaganda and disinformation efforts aimed at undermining or influencing the policies, security, or stability of the United States and its allies and partner nations. -Section 1287 of FY17 NDAA (as amended by the FY19 NDAA)

Furthermore, the article shows a tweet claiming to have been slandered – without evidence of any such slander.

Many of us accepted that toxic slandering is part of the cost of being an analyst or doing human rights work in a very polarized climate of the US government's maximum pressure campaign, but now we realize that part of the slandering is actually being funded by US taxpayers. https://t.co/nIwINQXnLd

Yes, it is clearly the mission of the Global Engagement Center to expose misleading, false, and bad propaganda, disinformation, misinformation, and fake news.  If your activities are not truthful, you cannot claim slander and definitely not victimhood.

Yes, it is a US funded operation designed to counter foreign disinformation, propaganda, fake news and other claims which are not truthful and paint a false narrative in an attempt to mislead.

The issue was also reported by The Jerusalem Post in “Slander And Lobbying Allegations On Iran Divide U.S. Domestic Politics“.  According to the report, “the US State Department had suspended funding from its Global Engagement Center to the Iran Disinformation Project, which allegedly runs the @IranDisinfo account.”

The issue is also fodder for partisan political sniping.  Both Ben Rhodes and Colin Kahl, two former Obama officials, took shots at the Trump administration in connection with this issue.

The author of the article, Derek Davison, an experienced Washington DC reporter, should know about Strategic Communications, Public Diplomacy, and Information Operations. He should also be acutely aware of efforts to counter foreign disinformation.

His final paragraph reveals his agenda.

Apparently his agenda is to undermine the United States efforts to reign in the rogue regime that is Iran.  Now Derek Davison has been exposed as a poor reporter who has failed to properly research, document, and corroborate.

Dare I ask a question of Mr. Davison, such as why is he enabling Iranian propaganda activities?

One thought on “Why Is A Washington Reporter Enabling Iranian Propaganda?”