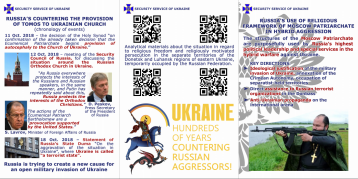 Ukraine’s SBU has issued two pamphlets warning how Russia is planning to use the ROC, the UOC-MP, and the UOC situation as a cover to stage provocations in Ukraine to justify a Russian invasion. The pamphlets also directly accuse the UOC-MP of supporting the Russian invasions of Ukraine, supporting terrorists, and issuing anti-Ukraine propaganda.

This is the first time I have seen the SBU issue a warning in this format of probable warlike Russian actions. This is also very confrontational to the UOC-MP, who is a subordinate part of the ROC.

Statements from Russian FM Lavrov and the Presidential Spokesman Peskov are included. The statement by Peskov say that Putin has declared that protecting “Orthodox Church” members is a priority, precisely the same logic he used to invade Crimea – protecting Russians and the Russian language.

The pamphlet also includes a warning that “Russia is trying to create a new cause for an open military invasion of Ukraine.”

It is notable the pamphlets “contain special QR-codes that provide direct access to summary information on relevant facts of Russian criminal activity uncovered by the SBU or collected by public activists.”  This is a fairly high-tech way of passing information, enabled by the widespread use of smart phones.

The two pamphlets are pure information, some might even call it propaganda, but it is an effort to clearly show Russia as the aggressor and showing that Russia has no scruples, no principles, no morals, and will do or say anything,  supported by the UOC-Moscow Patriarchate and the Russian Orthodox Church within Ukraine. 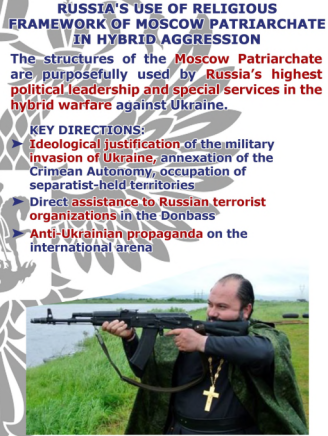 The UOC – MP and the ROC are directly accused by the SBU of three actions in support of Russia:

These are some SERIOUS charges against the UOC-MP and the ROC within Ukraine. The UOC-MP and ROC have been, de facto, declared treasonous to Ukraine, of supporting Russian invasions, assisting terrorists, and spreading anti-Ukrainian propaganda.

The picture of the priest holding an AK-74 in a firing position is also very effective at portraying priests as pro-Russian.

This is not at all subtle, and that’s a good thing.

SBU presents a series of special informational booklets about the forms and methods of Russian aggression. The first two issues are devoted to the terrorist activities of Russian special services in Ukraine and Kremlin’s use of the religious structures of the Moscow Patriarchate in the hybrid war.

The booklets are published in Ukrainian and English, contain special QR-codes that provide direct access to summary information on relevant facts of Russian criminal activity uncovered by the SBU or collected by public activists.

The topic of the first issues is not accidental. As SBU Head Vasyl Hrytsak noted: “The targeted instigation by Russian special services of inter-confessional conflicts in Ukraine in combination with provocations of direct terrorist action can be the reason for an open military invasion of Russian Armed Forces into our country.”