One new bit of news: Glavnet (what is mistakenly referred to as the Internet Research Agency), is now located on Optikov Street, about 3.9 km away from their original location at 55 Savushkina Street.

ST. PETERSBURG, Russia — Operating from St. Petersburg, they churned out falsehoods on Facebook, Twitter, Instagram and YouTube. They promoted Donald J. Trump and denigrated Hillary Clinton. They stole the identities of American citizens. They organized political rallies in several states, and hired a Clinton impersonator for one event, in West Palm Beach, Fla.

On Friday, 13 Russians were indicted by a federal grand jury in Washington on fraud and other charges. Details of their roles in a three-year campaign to disrupt American democracy have begun to emerge from the indictment, other records, interviews and press accounts. 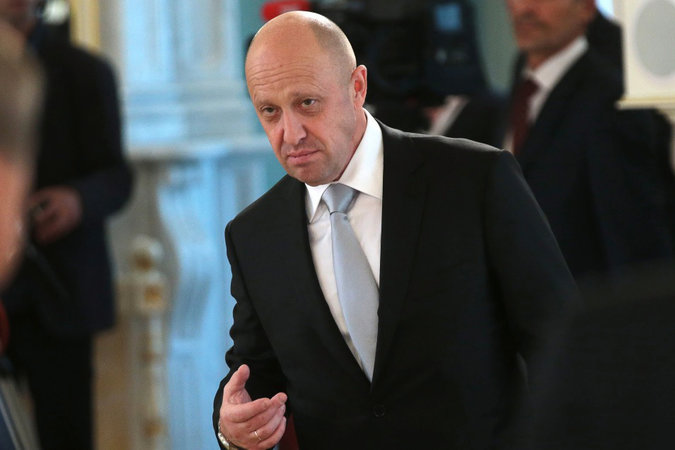 A former teenage champion cross-country skier who was later imprisoned for robbery, Mr. Prigozhin started a hot-dog business as the Soviet Union collapsed and eventually branched into convenience stores and restaurants. He received catering contracts and threw lavish state banquets. He has played host to world leaders like George W. Bush and Jacques Chirac. He developed a close relationship with President Vladimir V. Putin, and has been derogatively called “Putin’s cook.”

According to the indictment, he controlled two companies that financed the operations of the Internet Research Agency, a shadowy troll farm. Created in 2013, it began a so-called translator project in 2014 that targeted Americans and pursued “information warfare against the United States.” It employed hundreds of people and, by the summer of 2016, was spending $1.2 million a month.

In the past five years, Mr. Prigozhin has received government contracts worth $3.1 billion. Lately, he has branched out into areas like recruiting contract soldiers to fight overseas and establishing a popular online news service that pushes a nationalist viewpoint, making him even more indispensable to Mr. Putin. Mr. Prigozhin, 56, declined several interview requests from The New York Times in recent months.

One sign of his connection to the trolls, according to the indictment: In what appeared to be something of an inside joke, people working for the Internet Research Agency paid an American to hold a sign outside the White House — “Happy 55th Birthday, Dear Boss” — to celebrate Mr. Prigozhin’s birthday (June 1) in 2016.

The C.E.O.: Mikhail I. Bystrov

Mr. Bystrov is a retired St. Petersburg police colonel who, according to the indictment, joined the company in February 2014 and became its highest-ranking official. He also led shell entities that were used to conceal its activities, including one called Glavset, a so-called database and information company. It shared an address — 55 Savushkina Street — with the Internet Research Agency. (The troll farm has since moved to Optikov Street, according to the local press.)

The troll farm soon drew notice in Russia: news outlets reported that it employed 250 people in 12-hour shifts to provide a round-the-clock flow of pro-Kremlin posts and comments, praising Mr. Putin and excoriating President Barack Obama and President Petro O. Poroshenko of Ukraine. Monthly salaries ranged from $1,100 for a junior analyst to $1,400 for a blogger to $4,200 a month for senior management.

Mr. Bystrov, who is believed to be 59, has avoided reporters and declined interview requests.

A young tech entrepreneur, Mr. Burchik, 31, joined the company in October 2013 and became its executive director, the No. 2 official, by March 2014, according to the indictment.

According to online records, he registered a company in 2009 called Add1.ru that was behind a 2014 hoax. In that hoax, a young woman in aviator sunglasses calling herself Zoe Foreman spent hours spamming politicians and journalists about a horrific — and fictitious — chemical plant explosion in Louisiana.

“I have heard of it, but I don’t work in this organization,” he told the journalist Adrian Chen, who wrote about the troll farm in 2015 for The New York Times Magazine. He said he had bought and sold many internet domains and didn’t remember them all.

Throughout the troll farm’s operations to interfere in American politics, including the election, “Burchik was a manager involved in operational planning, infrastructure and personnel,” according to the indictment.

The business news website RBC reported on Friday that Mr. Burchik claimed not to know English well enough to understand what he had been accused of. “If a few hundred million Americans are so worried about the activities of a regular Russian small-business man from the IT-sphere doing website development, then it seems the situation in the country is completely grave,” he said.

Mr. Burchik told Komsomolskaya Pravda, a Russian tabloid, that he was not concerned about being detained while traveling abroad. “I love my country. In Russia there are many beautiful places where you can go,” he said.

Mr. Burchik has worked on several small government projects in St. Petersburg. In 2015 he was awarded a contract worth about $20,000 to develop and publish a newspaper called Dvortsovy Ukrug, for the administration of one of St. Petersburg’s municipal districts, according to government documents.

That same year, another municipal district government awarded him a similar contract to prepare a film about its activities. And in 2012, he won a $4,500 contract for organizing a program for promoting “tolerance and prevention of drug addiction” for local schools.

Ms. Bogacheva and Ms. Krylova obtained visas to visit the United States in 2014 “under false pretenses for the purposes of collecting intelligence to inform the organization’s operatives,” according to the indictment. They are said to have embarked on what amounted to a three-week reconnaissance tour, visiting California, Colorado, Illinois, Louisiana, Michigan, Nevada, New Mexico, New York and Texas. Along the way, they bought SIM cards, cameras and drop phones and discussed “evacuation scenarios” and other security measures.

According to the indictment, Ms. Bogacheva oversaw the data analysis group for the “translator project.” A woman with the same name was listed in 2013 on the website of ITMO, a prestigious science university in St. Petersburg, as a doctoral candidate. She worked there from 2011 to 2014, as an engineer in the eScience Research Institute, according to a university spokeswoman. Many of the school’s graduates have gone on to work for the Russian government or for large tech companies.

Ms. Bogacheva also owns IT Debugger, a company that says it has worked with “difficult clients.”

Ms. Krylova became the No. 3 person at the troll farm, according to the indictment. According to what appears to be her LinkedIn profile, she is a graduate of the Moscow State University of Printing Arts, where she studied with the faculty of advertising and public relations.

She was the head of the Federal News Agency, which is believed to be Mr. Prigozhin’s flagship media outlet. The agency is known for its exclusive coverage of Russian private armies on Syria’s front line.

Mr. Polozov ran the troll farm’s I.T. department and oversaw the purchase of space on computer servers inside the United States to set up virtual private networks that masked the agency’s Russian location, according to the indictment. After a co-conspirator traveled to Atlanta in November 2014, he gave Mr. Polozov a summary of his trip and expenses.

According to business records and Mr. Polozov’s page on the Russian social network Vkontakte, Mr. Polozov runs a software company called Morkov, which was registered in 2013, and began to recruit web developers and programmers in early 2014.

“In need of people with knowledge of website promotion for full-time work,” he wrote in a Vkontakte post on May 28, 2014. “If interested, send me a personal message. You can send your résumé immediately.”

On Vkontakte, he shared political jokes at the expense of Russia’s rivals and neighbors. One post he shared in June 2015 quoted the Chechen writer German Sadulaev:

Not much is known about the Bovdas, including their relationship. According to the indictment, she was the head, and he the deputy head, of the “translator project,” the troll farm’s campaign to target Americans with messages on Facebook, Twitter, Instagram and YouTube, starting in April 2014. The project employed hundreds of people and, by the summer of 2016, was spending $1.2 million a month. It hid activities through a web of shell companies. According to the indictment, Ms. Bovda and Mr. Bovda both worked for the troll farm for about a year, from November 2013 to October 2014.

According to the indictment, Mr. Aslanov oversaw many of the operations targeting the United States election. An investigation by RBC, a newsmagazine, found that Mr. Aslanov was in charge of the “American department” of the troll farm. It reported that Mr. Aslanov arrived in St. Petersburg in 2000 from his hometown Ust-Kut, in the Irkutsk region. His Vkontakte profile says he graduated from the Russian State Hydrometeorological University in St. Petersburg in 2012, and a university page indicates that he studied economics and wildlife management.

The RBC report says that he spent several months in the United States in 2009, visiting New York and Boston. His work at the troll farm included registering legal entities in the names of his employees.

His name appears in public records as general director of Azimut — which, according to the indictment, was used to funnel money to the troll farm — and of the Reputation Management Center. According to its website, the Reputation Management Center first determines what kind of reputation a client has online through media monitoring, and then creates bots that improve its image through positive posts, “drowns negative reviews in a sea of favorable information about the company” and “creates hype” around it.

Ms. Kaverzina grew worried after Facebook revealed last September that it was cooperating with the authorities to look into Russian advertising on the platform. “We had a slight crisis here at work: the F.B.I. busted our activity (not a joke),” she wrote to a relative, according to the indictment. “So, I got preoccupied with covering tracks together with the colleagues,” she added. “I created all these pictures and posts, and the Americans believed that it was written by their people.”

Mr. Podkopaev was an analyst for the “translator project.” He conducted research on the United States and drafted social media messages for the organization, according to the indictment.

Mr. Vasilchenko posted to, monitored and updated social media accounts while posing as Americans or as American grass-roots organizations. He led two subgroups focused on political interference in the United States, including the election. On Vkontakte, he shared a meme in October 2016 that imagined a drinking game in which players took a shot every time Mr. Trump talked about building a wall along the Mexican-United States border or making America great again, told voters to believe him, or complained about being treated unfairly; and every time Mrs. Clinton coughed, sipped water, laughed awkwardly, or mentioned her daughter or President Barack Obama.

Mr. Venkov inhabited multiple social media personas, according to the indictment. Someone with that name belongs to a Facebook group of social media marketing professionals and posted a photo last May of himself wearing a Republican elephant pin.

One thought on “The Troll Farm: What We Know About 13 Russians Indicted by the U.S.”