Editor’s Note: The MYMEDIA program, a Kyiv Post partner, is a joint venture between NIRAS and BBC Media Action and financially supported by the Danish Foreign Ministry. Content is independent of the donor.

Since 2014, the West and post-Soviet countries have been trying to fight Russian propaganda. Approaches differ: some develop fact-checking departments and conduct their own investigations; some invest in monitoring and analyzing Russian propaganda. The governments of Ukraine and Baltic countries have banned Russian TV channels in order to minimize the influence of propaganda on the local Russian-speaking population.

MYMEDIA talked to Belarusian activist Pavel Marozau, the founder of the anti-propaganda internet TV channel ARU.TV, whose funders include MYMEDIA. Marozau shared his story of fighting for democracy in Belarus, his escape from persecution and how satire and cartoons can be a weapon to combat propaganda.

“Marozau, what would you like to do next?” his friends asked him once he got off the train in Tallinn, “go to university, or get political asylum?”

Before fleeing Belarus in 2006, Marozau had been a political activist for six years. He was the one who dared to insult “the last dictator in Europe” personally – he and his little team had produced a series of satirical cartoons called “Multclub,” with Alexander Lukashenko as the dictator-protagonist.

Soon the Belarusian authorities initiated a legal case against him. It was time to get out. He could still exit through the open border with Russia. However, with an arrest warrant covering all former Soviet countries likely soon to be issued, that was a poor option. Luckily, Marozau had visited Estonia and the visa was still valid. Also, many friends had already fled there.

Marozau didn’t want to enroll in a university in Tallinn. He wanted to continue social activities that he had started back in Belarus. A week later he began work on “The New Way for Belarus,” a Tallinn volunteer group of activists, journalists and politicians striving for a democratic future. The organization is celebrating its 10th anniversary.

After six months in Estonia, Marozau understood that he would need the political asylum which his friends had suggested. That became apparent after an incident involving another ‘Multclub’ contributor: While travelling from

Kyiv to Tallinn, his friend was stopped for extradition to Belarus by the authorities in Tver, Russia.
Even today, 10 years later, Marozau’s relatives and friends are still pressured by Belarusian authorities.

“It was especially acute in 2006, 2007, 2008. They even tried to forward my case to Interpol, but it was rejected. The Belarusian KGB would come to my relatives in the mornings without warning,” he says.

After nine years of focusing on Belarus, Marozau and his team in 2015 decided to shift their efforts to combat Kremlin propaganda in Russia, Ukraine, Belarus and the Baltics.

In response to the annexation of Crimea, Russia’s war in eastern Ukraine and the wave of hate speech and disinformation by Russian broadcasters, they created ARU.TV, a Russian language internet TV project.
ARU.TV offers satirical cartoons as well as comments from experts on social and political events. 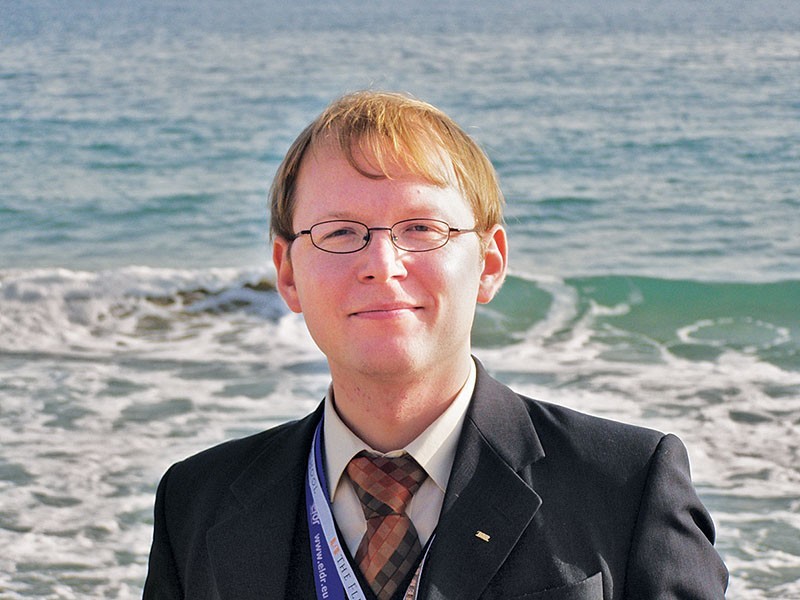 Pavel Marozau left Belarus in 2006 and runs ARU.TV, which keeps tabs from Estonia on Russia and Belarus. (Courtesy)

In less than a year, ARU.TV has managed to attract an audience of over 90,000 subscribers on Facebook and over 30,000 on Youtube, quickly becoming more popular than established projects such as Russian Grani.ru, Belarussian TUT.by and Ukrainian Espreso.tv., and not far behind the Riga-based Meduza project.

Even so, ARU.TV is run by just 15 people, mostly volunteers.
And while ARU.TV’s traffic drivers are social networks, they still cannot afford to hire a professional social media manager. Marozau and his team are rapidly learning the basics of social media management. “There is nothing super-difficult about social media. One just needs to know some basic rules. And try.”

To reach their target audience, ARU.TV is using different formats: “Satire helps to clear mental boundies, and our interviews with famous political analysts offer ‘food for the mind’, ‘deeper stuff’, ” Marozau says. “If there is a heated atmosphere and polarization – satire works well.”

ARU.TV is not traditional journalism. “What we do is activism with elements of journalism. For standard journalism with impartial news, there is, for example, Meduza. We deliberately give emotional, satirical comments to touch people and make them think.”

Marozau believes that the existence of interdependent projects offering critical content makes a difference, even though they might not have large audiences. One of the challenges is money. ARU.TV is financed mainly by Western donors, generating only 20 percent of its revenue independently by producing programs and earning money from Youtube advertising.
However, ARU.TV’s goal is to reduce dependency on donors from 80:20 to 50:50. The plan is to achieve this through a crowdfunding campaign on the Ukrainian platform Spilnokosht and on the Western platform Kickstarter, as well as to crowdfund directly from their viewers.