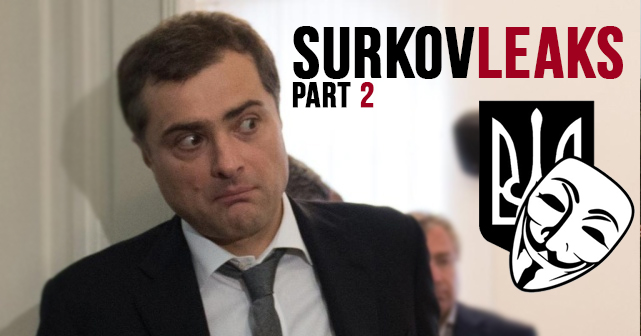 Surkov not only coordinated all Russian activities in Ukraine but also doubled as the Russian propaganda chief.  Busy boy.

The dump contains messages of the early period (2013-2014) and the more recent archives for 2015-2016. The new leak has been codenamed SurkovLeaks (part 2). It focuses mainly on the pochta_mg@mail.ru. mailbox. The dump contains 336 incoming and 87 outgoing messages, with the total volume of 340 MB (download).

InformNapalm international volunteer intelligence community conducted verification of the published data and confirmed the authenticity of the emails.
While analyzing the data with the help of OSINT methods, it became possible to establish the specific person who owns the mailbox: Maria Vinogradova, adviser to Vladislav Surkov. This mailbox was the destination for some extraordinary and even arguably secret messages, lists, and reports, even though the largest portion of the dump consists of routine and trivial messages.

InformNapalm has prepared a brief overview of the most interesting details found in the messages published by the Ukrainian hacktivists.