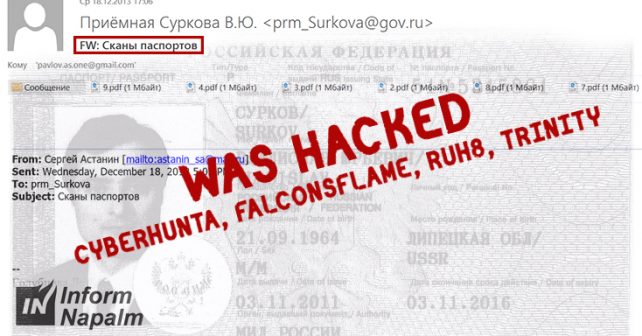 Media outlets like BBC, Guardian and the NYT should no longer call Russian military and mercenaries ‘rebels’ and ‘separatists’ after #SurkovLeaks.

Don’t you all think it’s time to wake up to the fact of Russian direct aggression in Ukraine?

InformNapalm volunteer intelligence community has received hard evidence of the successful hacking operation on the office of Vladislav Surkov (# SurkovLeaks) carried out by the Ukrainian cyber-alliance.

On Monday, October 24, 2016, news about the hacking of Vladislav Surkov, a presidential aide to Vladimir Putin, circled the majority of Ukrainian and Russian media.   There were mixed reactions among our readers to the data presented: some found unconvincing the scanned passport copy provided in the announcement on cyberhunta.com.

On October 25, came the official Kremlin reaction to the news.  Presidential press secretary Dmitry Peskov was vague while answering the journalists’ questions.  He did not directly deny the fact of hacking of the Russian presidential aide’s mailbox, but parried the question with a compliment to Surkov calling him “a talented man,.. [hackers] have always been seeking to impute many different alleged intentions to him”.

Following numerous requests of the readers, InformNapalm community made a direct request to the cyber-alliance of Ukrainian hacktivist groups CYBERHUNTA, FalconsFlame, RUH8 and TRINITY for additional information, evidence and clarifications.

In the course of communication with the hacktivists, new details became known and we also received a Microsoft Outlook data file (.pst) of the prm_surkova@gov.ru mailbox with 1GB worth of data (mailbox file on GOOGLE.DRIVE , mailbox file on RUH8  ).

(By the way, the hacktivists also possess data on Peskov obtained during hacking of a number of addresses of assistants and clerks of the Presidential Administration of the Russian Federation, but presenting them is beyond the scope of this publication).

The hacktivists made the material from the period from September 2013 to November 2014 available to the general public. That was the time when major developments of the active phase of the Kremlin’s Novorossia project were unfolding.

The materials relating to the more recent period of 2015-2016 have been currently submitted for analysis to intelligence agencies, they are not subject to disclosure because of their operational value.

The correspondence contains detailed information about the business [1, 2] and media interests of the Russian Federation in Ukraine and, in particular, about the risks of economic blockade of the territories controlled by Donetsk People’s Republic (DPR) and Luhansk People’s Republic (LPR) terrorist organizations. The files also contain comprehensive lists and contact details of the staff of the Presidential Directorate for Social and Economic Cooperation with the Commonwealth of Independent States Member Countries and contact data of the so-called leadership of the self-proclaimed Republic of Abkhazia (RA). There also are agent leads for work with “key figures of RA” and much more.