The findings consist of analysis of the questionnaire results filled in by 11 NATO nations and structured interviews with 6 NATO nations during the first half of 2015.

Of the 11 nations who responded to the questionnaire, 6 cited the use of the NAC approved definition for StratCom, or a close derivative of it, as their national definition. The following table is an interpretation of the key concepts used by nations in their understanding of StratCom (combined data from questionnaires and interviews): 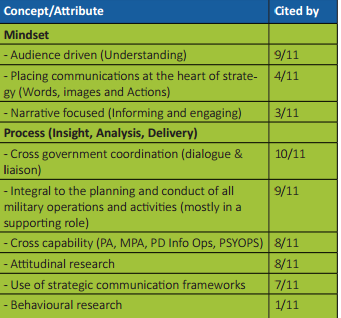 It would appear that most nations tend towards a description of process rather than mindset in their definition of StratCom. Many described the structure and key personnel used to impart the capability when asked for a definition. There was a popular tendency for audience focus across the definitions of respondent nations, both in mindset and process. Surveyed nations demonstrated a strong tendency towards attitudinal polling as a means to gauge audience perception rather than aspiration towards behavioural change.

Almost all respondent nations agreed upon the importance of cross capability coordination. At the military level this is described as the essential coordination of information activities in support of strategic goal. At the political level the importance of cross departmental consensus was emphasised but most nations described the delivery of this function to be via dialogue and liaison rather than formalised policy or doctrinally led procedure.

The majority of nations described StratCom as a supporting rather than supported role at both the political and military level. However a notable proportion noted the need for this to change and cited developmental projects to increase the relevance of the capability in policy and strategy making.

When questioned about the degree to which StratCom practices were designed to change attitudes or behaviours among target audiences, very few nations made a distinction between the two concepts. Most respondents did not sufficiently understand or accept the concept of behavioural change leading attitudinal change and therefore relied upon attitudinal surveys and polling to measure changes in behaviour. 3 potential reasons are offered to explain this:

Analysis of organisational structure gives an insight into the relevance placed upon StratCom at military and political levels. Most nations place a high degree of importance on cross government coordination but few have developed this beyond liaison and dialogue when incorporating communications as a supporting function to policy or operational plans. Increased cooperation between the StratCom sections of various government departments reported by certain nations is encouraging and there is a clear aspiration among most nations to develop StratCom into a fullyfledged command function.

The seniority of key appointments in different disciplines within military and political organisations gives an insight into the degree of importance those organisations place upon StratCom. This provided a further indication of the degree to which communications sits at the heart of strategy. The greatest emphasis in both establishment and in rank across the sample of respondent nations is in Public Diplomacy (PD). The PD therefore forms the core of participating nations’ StratCom capability and is likely to dominate developmental thinking. In lead rank terms the data suggests that status falls off progressively through the capabilities of PA, MPA, Info Ops and PSYOPS. This is mirrored in the reported data for levels of establishment. The highest degrees of creativity in StratCom capability development seems to lie in those nations with the smallest institutional systems.

THE IMPACT OF ORGANISATIONAL CULTURE

Firstly, the organisational culture associated with the “management of information” in any military organisation is heavily influenced by security classification. This has a significant bearing upon its communications culture encouraging, for good reason, the creation and maintenance of information silos and restricting the ability of organisations to adopt adhocracy or market behaviour. Secondly, bureaucratic behaviour is not necessarily a bad thing in the defence communications domain. It is synonymous with a corporately derived and consistently delivered narrative that is managed to maintain resonance among key audiences. Matching words with deeds, it seems, is a great deal more challenging in an environment that encourages initiative and risk taking at subordinate levels of command. A larger comparative sample and more longitudinal research is required to investigate the relationship between bureaucratic behaviour and organisational maturity and the incidence of adhocracy in nations experiencing more tangible and present communications threats. 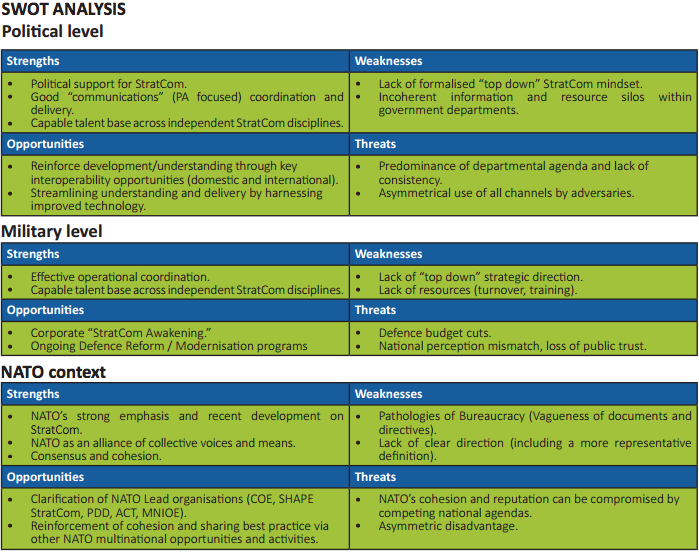