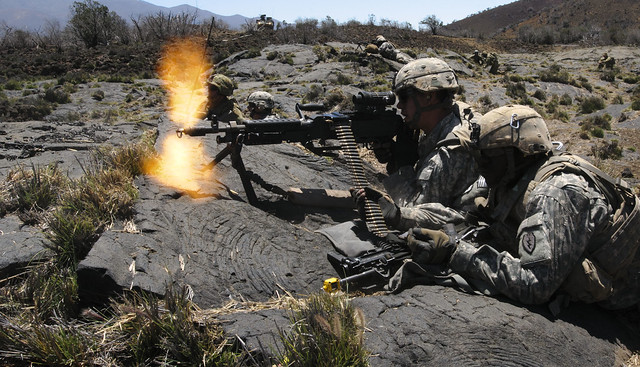 According to Wikipedia, it is defined thusly:

In military science, suppressive fire (commonly called “covering fire”) is “fire that degrades the performance of an enemy force below the level needed to fulfill their mission. Suppression is usually only effective for the duration of the fire”.[1] It is one of three types of fire support, which is defined by NATO as “the application of fire, coordinated with the manoeuvre of forces, to destroy, neutralize or suppress the enemy.”

As a former Infantry Officer, I would have machine guns lay down suppressive fire, firing our machine guns into enemy positions to keep their heads down and prevent return fire.  This allowed my soldiers to maneuver into a position to better engage the enemy.

This morning I was describing how paid commenters, hired by the Russians, work.  They would present factoids that uphold their side of an argument, I am guessing they did it to reinforce other pro-Russians.  Certainly it was not to convince anyone to change sides and take their position because all too often their logic was so far out of whack as to be almost humorous.

If their facts and arguments were not effective, they would begin to attack people with opposing viewpoints vociferously.  It felt like suppressive fire.  If I opposed any paid commenters I would suddenly receive fact after fact after fact, fired in my direction.  Usually these facts were copied and pasted from the latest talking points.  These facts supported the argument at hand.  Then, if that didn’t work, they would use what is called a red herring, facts about an issue removed from the current issue, in an attempt to distract me or derail the argument.  Then, if that argument didn’t work and I so rudely continued pressing the issue, they would engage in personal attacks.  Ouch, how gauche.  It became obvious after a little while that this was going to be standard procedure, so I just accepted it.

Let me recap the situation.  I would engage in a discussion about something having to do with Ukraine and Russia and would encounter numerous pro-Russian paid commenters.  As soon as I was recognized as “he who does not agree” I would receive “suppressive comments”, and as I continued, it became withering fire in an attempt to overwhelm me.  Part of this can be directly compared with infantry combat.  As I would engage the main commenter, his comrades would engage me as well, usually with different factoids.  I now had my attention split between two or three and then more commenters, gradually increasing to a point where I could not possibly engage every argument with the clarity it deserved, and my “resistance” was overwhelmed.  In a shouting match this is known as being shouted down.  In American football this is known as “piling on”.

This is a tactical term, used down in the trenches of comments in discussion groups in Facebook, LinkedIn,VKontakte, LiveLeak, Washington Post – any number of places that allow comments.  To what end?  My guess is the Russians are attempting to mute counter-arguments to their perspective and to reinforce their position within their target audience, the Russian and pro-Russian population.  MH 17, according to the Russians, was brought down by Ukraine.  Any other position receives “suppressive comments”.

Error: Twitter did not respond. Please wait a few minutes and refresh this page.