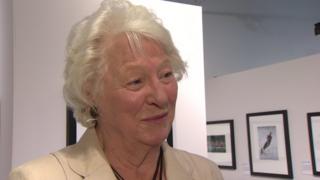 The display contains many of Northern Ireland's sporting triumphs from 1972-2012 and coincides with the 40th anniversary of her gold winning performance at the 1972 Games in Munich.

The exhibition at the Ulster Museum runs until 2 September.

Return of fans brings some of football's soul back

How do fans feel about a European Super League?