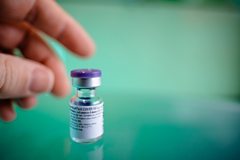 When will I get a Covid vaccine?

Three vaccines have been approved and two are being rolled out across the UK, so when might you get one?

Explore the data on coronavirus in the UK and find out how many cases there are in your area.

Military could be used to transport Covid vaccine

England's tour of South Africa is abandoned after a number of positive coronavirus tests.

The lateral flow tests will be trialled among visitors to 14 care homes in five local authority areas.

'The vaccine is here. But I'm scared of needles'

Up to one in 10 of the population are anxious about injections - so what can they do?

The Pakistan hospital runs out of oxygen for hours, with patients' relatives 'begging' staff to help.

Most of California under strict new lockdown

Around 85% of the state's 40 million people are under a stay-at-home order that includes Christmas.