What's behind the rise of QAnon in the UK?

A wide-ranging conspiracy theory about elite Satan-worshiping paedophiles has migrated from the US, inspiring a series of regular street protests. How did QAnon find a British audience?

On a sunny day in late August, nearly 500 people gathered in central London. It was the first event held by a new group, Freedom for the Children UK.

As the crowd marched from the London Eye to Buckingham Palace, chants of "Save our children!" echoed in the air.

The ethnically diverse crowd was made up mostly of young people and women, some with their children. At the head of the march were group leaders Laura Ward and Lucy Davis.

Ms Ward, 36, who says she underwent a "spiritual awakening" during the Covid-19 lockdown, created a Facebook group in July "to promote and organise peaceful events that raise the awareness of child exploitation and human trafficking". It took off, gathering thousands of followers in just a few weeks.

Read full article What's behind the rise of QAnon in the UK?

US election 2020: 'QAnon might affect how my friends vote' 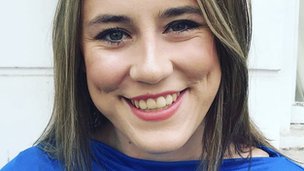 The US election campaign is full of talk about the pandemic, the Supreme Court and police reform. But millions of Americans are tuning into an entirely different conversation.

"Saying it out loud, it just sounds crazy," says 24-year-old Jade Flury, reading out a recent text conversation she had with one of her friends.

Read full article US election 2020: 'QAnon might affect how my friends vote'

Many appear to be politically motivated and conflicting information from the White House over the weekend hasn't helped.

Misinformation about wildfires raging across the US state of Oregon has been rife on social media, prompting local officials to try to dispel the rumours.

How Covid-19 myths are merging with the QAnon conspiracy theory

Online and in real-life demonstrations, two viral conspiracy theories are increasingly coming together.

At first glance the only thing they appear to have in common is their vast distance from reality.

A worker at a major NHS provider is under investigation by her employer for posting a video on social media in which she appeared to suggest the Covid-19 pandemic didn't exist.

Louise Hampton, who works for Care UK, posted a video to Facebook on Wednesday in which she claimed her service had been "dead" throughout the Covid-19 pandemic and she had done nothing at all.

Coronavirus: The viral rumours that were completely wrong

Remember those panicky viral messages you were forwarded on WhatsApp at the start of the pandemic?

They may have come as a text, voice note or blurry picture forwarded by a "friend of a friend" - and most of them were scarcely credible. Here's the truth behind a few of the most heart-stopping coronavirus rumours that we debunked at the time.

1. Tanks never arrived on the streets

George Floyd's death might not have caused global outrage if it hadn't been filmed. But do viral videos actually reduce police abuse?

"They killed this man, bro. He was crying, telling them 'I can't breathe.'"

Facebook is launching a campaign to help people spot fake news amid a growing advertising boycott putting pressure on the company to tackle misinformation and hate speech.

Steve Hatch, Facebook's vice president for Northern Europe, says the media literacy campaign launched with fact-checkers FullFact is evidence that the company is "listening and adapting".

How Facebook scammers target people at risk of suicide

A BBC investigation has uncovered dozens of Facebook pages claiming to sell a deadly poison to people who are contemplating suicide. It's the work of scammers - but how do they operate?

It's late. I open WhatsApp and see a message from the dealer, claiming he can sell me deadly pills.

The BBC bureau on the internet. Reporting on what's being shared and asking why it matters.

Our radio show airs every Saturday on BBC World Service

More from the Magazine